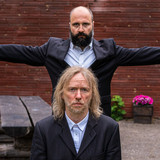 Puuluup is a duo – Ramo Teder (Pastacas as a solo artist) and Marko Veisson. A pinch of surrealism, modern folklore and talharpa revival! The old and the new stick together like water and sleet in Puuluup’s oeuvre. The instruments – talharpas – represent tradition and folklore. The characteristically susurrus sounds of these instruments are sent through effect blocks and a looper. The lyrics and melodies are a mixture of our musical memories and improvisation. Inspiration is often drawn from leiks from Vormsi, Finnish jouhikko repertoire, Sahel’s blues, chastushkas and other elements from the musical traditions from around the world. All kinds of random sources of inspiration are similarly important – unexpected excerpts from Polish TV series, old Estonian punk and sweetbread from Vormsi Island. As a side dish, when giving live concerts they also offer choreographic flittering which emerged on its own during the numerous days these two man spent in the rehearsal rooms. Their first album is "Süüta mu lumi" (Light My Snow), new album "Viimane suusataja" (The Last Cross-Country Skier") came out September 17th 2021.