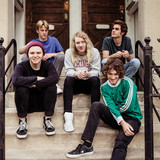 The Orwells formed in 2009 while they were attending high school in Elmhurst, Illinois. Cousins Mario Cuomo (vocals) and Dominic Corso (guitar) teamed up with brothers Grant (bass) and Henry Brinner (drums), alongside their friend Matt O'Keefe (guitar), and started making music together. Along with hitting the books and skating, the Orwells started recording their raucous indie rock songs. In 2011, they signed to L.A.-based blogger Justin Gage's Autumn Tone record label after they sent him a link to one of their videos with hopes it would lead to being featured on his website. The combination of their raw youth and rasping melodies on single "Mallrats (La La La)" was picked up by bloggers and the band's debut album, Remember When, followed in 2012.   Their frenetic live performances brought interest from a host of major labels, but they eventually signed to Atlantic Records and headed to the studio with producer Jim Abbiss (Arctic Monkeys, Kasabian) to work on new material. The following year they toured North America with Arctic Monkeys and made a memorable appearance on Late Show with David Letterman. Their sophomore effort, Disgraceland, was released in 2014 and reached number 69 on the Billboard album chart. Terrible Human Beings was released by Atlantic at the beginning of 2017.