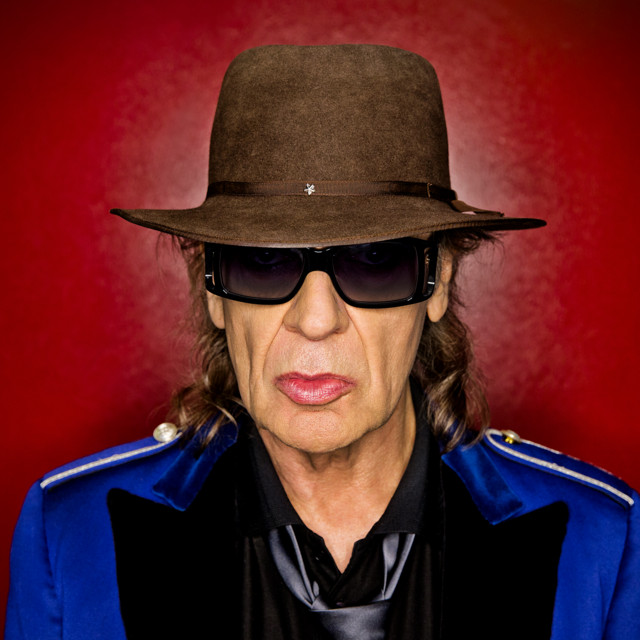 Udo Lindenberg is one of the most influential German rock singers of all time. Developing a unique style mixing straight-ahead rock with occasional jazzy or symphonic influences and witty lyrics, he was the first to show that rock music with German lyrics was acceptable and could even be internationally successful. Starting off in the beginning of the '60s in several jazz bands, he came to Hamburg in 1968, where he met Inga Rumpf, another influential German rock singer, and finally founded his first band, Free Orbit. After a short jazz stint as a drummer in Klaus Doldinger's band Passport, and an English-language debut album, he started writing German lyrics and released his German debut, Daumen im Wind (1972). His next album, Alles Klar auf der Andrea Doria (1973), provided his breakthrough in Germany and Lindenberg became the most exciting discovery in German rock. Throughout the '70s, he released a string of equally successful albums (most notably Votan Wahnwitz [1975], Panische Nächte [1977], and Dröhnland Sinfonie [1978]), which firmly established him as one of the greatest German rock icons. At the end of the '70s, he had arrived at a new stage in his career. He discovered Ulla Meinecke, who was to become one of the most successful female songwriters in Germany, he published his first book, Hinter All den Postern, and he jammed with Eric Burdon, who appeared as a guest star in the tour for Dröhnland Sinfonie. In 1980, he directed and starred in his first movie, Panische Zeiten, a comedy about a rock singer who is kidnapped by a government agent. After another book (Rock und Rebellion: Ein Panisches Panorama, 1981), he tried hard to finally get a tour through East Germany (where he enjoyed cult status). Apart from one concert in 1983 in East Berlin, a tour scheduled for 1984 was eventually canceled by the East German cultural apparatchiks, who probably feared his sardonic wit. The mid-'80s saw him getting more and more involved in political issues: he interviewed German ex-chancellor Willy Brandt, took part in the Live Aid concerts, toured the U.S.S.R., and started a correspondence with East German party boss Erich Honecker. In 1987, Lindenberg sent him a rocker leather jacket as a gift, a now-legendary symbolical gesture. After releasing his autobiography, El Panico, in 1989, he was awarded the Bundesverdienstkreuz, the highest award given by the German government. In the '90s, he dove into mainstream pop music and his song material became more commercial. Other German bands and singers honored him at his 25th tour anniversary by performing their own versions of his songs. From 1996 on, Lindenberg started a second career as a painter, with extensive exhibitions. Following another string of releases in the early 2000s, some of which missed the Top 40, Lindenberg released Stark Wie Zwei in 2008, his first German number one record. In 2011, he played at Hotel Atlantic, Hamburg, in a stripped-down acoustic show of material that stretched across his four decades of music. The performance was recorded for MTV: Unplugged and Lindenberg joined a select list of German acts to have been invited to perform for the series; the release, MTV Unplugged: Live aus dem Hotel Atlantic, spent eight weeks at number one in Germany in late 2011. The following year, Lindenberg staged a large-scale concert tour. One of the dates was documented on the 2013 audio/video release Ich Mach Mein Ding: Die Show. Another tour of German stadiums was announced for 2014. When Lindenberg returned to the studio to record Stärker als die Zeit, he brought along songs from a variety of friends and influences over the years, including Simon Triebel from Juli, Sera Finale from Keule, Benjamin von Stuckrad-Barre, Justin Balk, and Tobias Kuhn, among many others. The album was released in April 2016, and spent three weeks at the top of the German charts; it also reached the Top Ten in Austria and Switzerland. ~ Frank Eisenhuth, Rovi