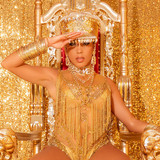 Jenn Morel is a Dominican Latin rapper and social media influencer known for aggressive rhymes and viral videos. Having started as a dancer and comedy influencer she is most widely recognized today for hit record ‘Ponteme’ which started out as a short freestyle video posted on her Instagram content series #FlowFriday. ‘Ponteme’ became a platinum selling record and blossomed into an international phenomenon. In just over three years as an active recording artist, Jenn Morel has amassed over 80 million streams,

actively tours in Europe, and has seen her releases synced with companies such as Samsung, Just Dance