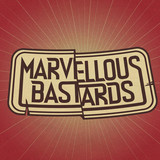 Marvellous Bastards is a music group from Thessaloniki, GR. Their music can be described as a mix of "Alternative-Funk Rock with a Pop cherry on top" !   The band is formed by three members, which are: Panos Doucas (Vocalist) Dimitris Papastergianos (Guitar) Ilias Garilas (Bass Guitar)   Those three bastards met in spring of 2019 in a recording studio and started immediately to write their own music. The chemistry kicked in from the very first moment and since then they became band mates and close friends. They write music and lyrics all together as a team usually by non stop improvisation sessions. The recipe is simple, a groovy bass and a fuzzy guitar partnering warm and funky vocals.