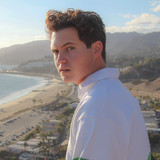 Rudy Touzet is a Miami native living on the West Coast. While studying at Chapman University he has spent his time following his dream of becoming a singer. Moving to Los Angeles has invigorated the love for music he found as a child. Now a bright 22 year-old, Touzet is here to make a name for himself with his alluring dark pop anthems. His first single Contigo, released in April of 2020, takes inspiration from his Cuban roots. Contigo is a Latin pop number that sounds like it was taken straight out of a popular Miami club. Touzet continues to produce seductive music that invites anyone to the dance floor to move their hips to his music. Runaway, released in October of 2021, captures the heartbreak of a failed relationship on top of a deep emotional track. Touzet’s voice in Runaway arouses it’s listeners with perfectly executed falsettos. With the help of Chapters (Luke Shrestha and Simon Jay), Rudy has seen his songs come to life. Rudy takes inspiration for his music from all aspects of his life. He can be found writing lyrics in the bathtub or a crowded club. His music is as predictable as his songwriting locations. Rudy steps away from the traditional break-up song and says what’s on his mind. Say Less, does exactly that. With lyrics like “move fast, say less, we’ll fly out to the islands” this song encompases the feeling of a passionate romance. Follow Rudy’s music career on his socials @rudytouzet.