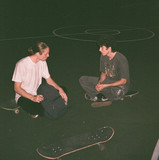 INVT is the multidisciplinary art project of Luca Medici and Delbert Perez. The duo specialize in primarily electronic music and fashion design. Their sound consists of a mix of Footwork/Jungle, Techno, Miami bass, and various forms of experimental club beats. Considered by Miami New Times as one of the “Ten Best Electronic Acts in Miami”, Luca and Delbert have grown their audience through their high energy live electronic shows as seen in the latest Boiler Room in Miami as well as their DJ sets and various independent releases that are all produced, mixed, mastered by the two. In addition to their music, Luca and Delbert have launched a sustainable clothing project in which they repurpose vintage clothing through screen-printing, embroidery, cut and sew, and acid washing. Every piece is a one of a kind garment made by hand in Miami by Luca and Delbert. Their designs and stylistic choices, such as the color schemes and graphics, are highly influenced by Miami’s unique environment. Many of the silk screen designs are photoshop collages made from photos they have taken in Miami. Many of these designs are also seen in cover art for their music which is also designed by them.