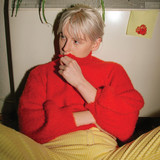 Isolation is nothing new for Fenne Lily – in fact, she's written an album of songs all about it. "It's kind of like writing a letter, and leaving it in a book that you know you'll get out when you're sad – like a message to yourself in the future," she says, referring to BREACH, her Dead Oceans debut she wrote during a period of self-enforced isolation pre-COVID. It’s an expansive, diaristic, frequently sardonic record that deals with the mess and the catharsis of entering your 20s and finding peace while being alone. "I think this record is proof that I can be emotionally stable, even if right now I feel a little bit up and down,” says Fenne. “There's the ability to find clarity in that. It's sobering, weirdly." Lead single ‘Alapathy’ is the first taste of a newly upbeat and urgent streak to Fenne's songwriting. Its insistent percussion mimics the anxious racing thoughts that Fenne deals with as an overthinker and chronicles how she “started smoking weed to switch off [her] brain.” The title is a made-up word that merges ‘apathy’ and ‘allopathic’ (as in Westernized medicine). "Western medicine generally treats the symptoms of an illness rather than the cause," explains Fenne. For Fenne, taking medication to improve her mental health didn’t solve her problems because she felt like she was only treating the effects of her discomfort, not the reason for it. BREACH is out September 18 via Dead Oceans.