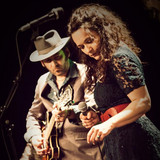 Meena Cryle & The Chris Fillmore Band create an exceptionally honest and exciting brand of music. Southern Soul, Blues, Gospel and Rock'n'Roll are the labels most commonly used to describe this stand-out formation from Austria. But the band prefers to avoid clichés and pigeonholing. Cryle/Fillmore’s Roots-Cosmos is wide-ranging and eclectic but always deeply rooted in the Blues. This also shows in their songwriting, an indispensable part of a distinctive and unique musical identity. Chris Fillmore, a exceptionally gifted guitar-player, plays a far more important role for the overall musical concept than just being a supportive piece of the band’s whole. He acts as a pivotal figure, an anchor which allows the singer to freely explore, and a safe-haven she can return to again. Both form a team that, in its intensity, is an exceptional and rare thing in today’s Blues-scene. Meena Cryle & Chris Fillmore believe in the transcendent power of music. "I don't think when I sing," she says. In the process, they also allow their listeners to escape from reality – at least for a little while.