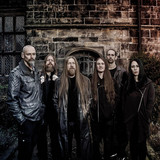 My Dying Bride formed in the dying summer of 1990 by Stainthorpe and guitarist Craighan. Across nearly 30 years, England’s most disconsolate export had not only extracted itself from the hardscrabble confines of their hometown of Halifax, but also turned into world-wide phenoms—nay, kings of doom-death!—their employment of violin, keyboards, Romantic era literary devices, and obsessively long songs serving as distinct identifiers. Albums Turn Loose the Swans (1993), The Angel and the Dark River (1995), Like Gods of the Sun (1996), 34.788%... Complete (1997), The Dreadful Hours (2001), and A Map of All Our Failures (2012) weren’t merely hour-plus long slabs of suffering but calendar moments, where desolation, sorrow, and all things blue (in dirge form) were passionately trumpeted and celebrated by fans absolutely devoted. My Dying Bride albums became life events for the low spirited and downhearted. Indeed, few bands in the ‘90s sounded like the Brits.