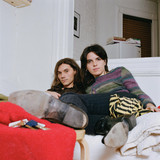 Purr began in 2017 as the second project from New York City born, raised and forever-based songwriting partners Eliza Barry Callahan and Jack Staffen. Just before graduating from college—where Callahan studied visual art and writing and Staffen, politics—the duo who had previously captured attention releasing deft, stripped down, warm-toned pysch-pop under their names, Jack and Eliza, shifted to what naturally felt like their next musical gear. If Jack and Eliza highlighted the songwriting prowess of a promising young duo, then Purr lets Callahan’s and Staffen's work bloom in the fertile ground of a fully realized soundscape. Purr builds upon an ageless, classic sound that at once looks at the past while leaning into their own, individual future.

After releasing two singles, they were offered a spot opening for Foxygen. That night, they met and gained a fan in Foxygen's front man and producer, Jonathan Rado (Weyes Blood, Father John Misty, Whitney, The Lemon Twigs). Several months later, Rado produced their forthcoming debut album, fittingly titled Like New, Like New is an irresistible testimony from a pair of young songwriters who are perpetually losing and finding themselves in the rush of becoming, letting go of the paths they've already tamped down and throwing themselves wholeheartedly into the thrilling unknown. The band performs as a five piece with Sam Glick on bass, Max Freedberg on drums and Maurice Marion on keys.