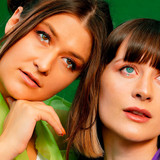 Featuring I Am Karate

Marta Pettersson & Erika Ahlström are the producers & songwriters behind the Swedish indie pop duo I Am Karate. They grew up on different sides of the deep forest in Dalarna, Sweden, and didn’t meet each other until 2013. After one single musical encounter in 2014 they knew they had to start a band, and made their debut in 2015 with an EP called “I Am Karate” with a progressive electronic pop sound similar to Fever Ray and Robyn. Later that year they released two singles, “Elevate” and “Bitter”, and were nominated Best Unsigned Act in GAFFA Magazine 2016. The same year they signed with Universal Music who released the EP “In Thin Air” and the single “Swayze” which got picked up for The Times Essential Tracks. After The Guardian’s interview, playing live on national television, and more than 1 million streams on Spotify they went back into the studio. Two years later I Am Karate returned with 3 self-released singles; “Expectations” in early 2018, “News” at the end of the summer, and to finish of the year the duo released their self-written and produced track “Work It Out” in december 2018. Since then the duo has been working on their debut album which they are now releasing the year of 2020. During 2019 they released 3 singles taken from the album; “Freaky”, “Original” & “Hey Love”. January 2020, together with Valley Music, the duo released the song “17” which is the 4th single from the album. The last single is due to be released in March 2020 and the album in May 2020.