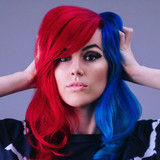 Contagious pop-dusted melodies infused with brave and beautiful storytelling has always been Emma McGann’s wheelhouse. From crafting anthemic guitar-led tracks that celebrate human imperfections to more melancholy songs that seep deep, McGanns writing is a refreshing flash of colour in a world of same old, same old. McGann is a British songwriter, independent trailblazer and award nominated artist who has earned recognition from fierce female forces, including Kyle Minogue, Nancy Sinatra and Beth Hart. Unafraid to be vulnerable, McGann invites fans to get to know and understand the human being behind the songs via her popular daily livestreams. This format has spun her career into a steel web of community, with fans worldwide tuning in each day to her live performances from an immersive, neon jungle studio that encourages viewers to interact with the environment Emma is performing in. Being one of the first artists in the world to pioneer this format, her music livestreams have racked up over 11 million views to date. Her songs have gained her BBC Radio 1 airplay, main stage festival slots across the UK, nominations for US awards including iHeart Radio Music Award & 3 Shorty Awards - all as an artist waving the independent flag. Embracing herself as a misfit, McGann has passionately carved a non-traditional path of her own and has an undeniable conviction to do things differently as a way of innovating and inspiring other artists to do the same.