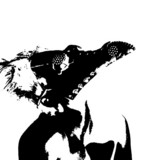 Midwich Cuckoos, are an explosive, rock’n’roll, punk and metal experiment which was initially put together by friends from around the world. What started out as a handful of songs written from one friend to another soon became a thoroughly 21st century, unpredictable, international punk-rock clusterf*%k. As a reaction to their 2018 experimental debut album ‘We Are Everywhere’, Midwich Cuckoos cemented a permanent line up, honed their live shows and then went into the studio to refine their identity. However, 2020’s world events had something different in mind, and all of a sudden their plague masked mascot, DeeDee, became a topical subject amongst friends and fans….. Visibility is poor, but the breathability and comfort of the leather is certainly superior for a trip to the supermarket, in case you were wondering. To keep creative and to tide over their flock of fans, the band released a series of acoustic renditions of their songs to keep spirits up in Lockdown. Weaving different genres with acoustic instruments, allowed for the music and lyrics to take on different meanings. The tracks have now been packaged up as an EP titled, ‘Going Nowhere: The Lockdown Sessions’, and which is available on all digital platforms as of the 30th March, to provide a bit more fun until the band’s next full-length album. Keep your eyes peeled on your cuckoo clocks.