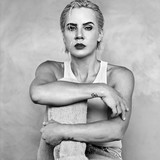 Norwegian singer/songwriter Ina Wroldsen began her career as a solo artist, but is probably best known as a writer for other high-profile artists. Her first real success as a songwriter came with her work on the British/Irish pop group the Saturdays' debut album, Chasing Lights, in 2008. The following years saw her build a large body of work that included songs for the Pussycat Dolls, Pixie Lott, Leona Lewis, and Britney Spears. By 2013 she had decided to dip her toes back into performance. She and Icelandic singer/songwriter Arnthor Birgisson formed the electropop duo Ask Embla, and the pair released their debut record, Northern Light, in 2013. The album went on to become one of the most downloaded/streamed records of that year in her native Norway. Her foray into her own work didn't stunt her songwriting career and she further expanded her list of collaborators, going on to write songs for Shakira, Jess Glynne, Demi Lovato, and Olly Murs. In 2015, DJ Calvin Harris released "How Deep Is Your Love" featuring Wroldsen's vocal, and the single became a hit as one of the year's most streamed/downloaded songs. In addition to her music-making and writing career, she also became a judge on the Norwegian version of Idol. Wroldsen continues to write for others, contributing to Clean Bandit's #1 singles Rockabye and Symphony, Tinie Tempah's "Text from Your Ex" and the Brit Award-winning Rag 'n' Bone Man's "Ego" from his debut album, Human.