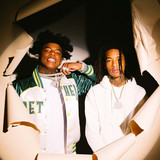 Yungeen Ace has built his massive following by standing alone. At 20, the artist born Keyanta Bullard describes his city of Jacksonville as “a jungle.” Originally a Chicagoan, he moved to Duval County, Florida as a child with no friends. Despite 11 brothers, Ace learned fast that if he wanted to survive, he could only rely on himself. “It’s hard out here. Everything we do, we gotta fight for it. We’ve got to go above and beyond just to make it. The surroundings are crazy. It’s a creep city. Nobody is for you out here, so you have to be really for yourself.” In June of this year, Ace was the lone survivor of a quadruple shooting when a car he was riding in was ambushed in a drive-by on Town Center Parkway, claiming the lives of his two friends and his brother. Ace was shot 8 times and released from the hospital into police custody less than 24 hours after the incident. Later that month, Ace was freed after a bid requiring him to remain on house arrest for a period of six months, but the moment was a painful and chilling reminder of the violence epidemic in his community. It was a dark spot in an otherwise upbeat time.