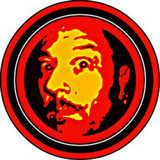 bio: Born in 1964, soon addicted to music, this eclectic artist has something to say, having a huge background in punk and rave movements, afro percussions, world music and electronics. Founder of Jambalay Records in 2010 and CBJ in 2011, he keeps producing his own stuff with various akas like EL BRUJO, DJ EL SANTI, ROBERT DOUBLEDEE MILLS. Also he is one of the three founders of United Techno Familia, the international collective of musicians, together with Hideyoshi Itoh (Thee Mad Scientist of Tokyo) and Henk Derr Djkstra from Netherlands. some hints about my music: I try to maintain a "raw" approach in the holistic sense of the term, based on the emotions that music gives me, there is a strong emotional dimension, I want to be transported to another dimension, mysticism and magical, where energy becomes palpable, physical. I like to hear a warm distortion in the sounds, which recalls the analog sound. I listen to many different musical genres and this is reflected in my compositions, ranging from the most radical electronics, to House - Tech House to Hardcore. The themes are characterized by a Funky dimension, or by a dark and melancholic connotation, but still addressed to the achievement of Tantric hypnosis or Dynamic Meditation.