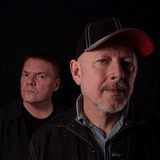 “We’re trying to make a future for other people to immerse themselves in,” says Graham Massey. “It feels a bit like an imaginary landscape. That’s always been a big part of 808 State, when you go back through the music: these kind of landscapes of futurism.” 808 State made their return with Transmission Suite, a record that remains true to the forward-thinking ethos of this singular band, but also takes them somewhere new. More stripped-back and conscious of space than the music that first made their name in the late ‘80s and early ‘90s, it is also suffused with a sense of history: specifically, that of their home city of Manchester, and the ghosts that swirl around it. Its tracks reflect the fact that electronic music also has a rich backstory, but 808 State being 808 State, they also point ahead. Put simply, Transmission Suite – which is their seventh album - evokes the past, present and future, which is not something you can say about many records. Its achievement is all the greater when you consider that their last album, Outpost Transmission, came out in 2002. 808 State music has appeared since then, and the band have continued to play live, but it wasn’t until last year that Massey and Andrew Barker finally decided to reconvene with a view to working on a big new tranche of material.