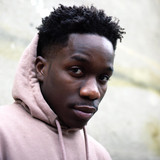 One of the more promising grime artists to arise from the Bow area of East London, Tinchy Stryder made his full-length album debut in 2007 and also performed as a member of the group Ruff Sqwad. Stryder initially established himself with a 2003 appearance on Wiley's Ice Rink EP, followed in 2004 by appearances on "Next Level," a song from Wiley's album Treddin' on Thin Ice, and the "MC Version" of the Streets' "Fit But You Know It," the latter of which was a U.K. hit. In 2005, he appeared on the Brucker & Sinden remix of Lady Sovereign's "Hoodie," which also became a U.K. hit. Having established his credentials as an up-and-coming grime star, in 2006 Stryder released a pair of mixtapes (I'm Back U Know, Lost and Found) and signed a recording contract with the independent label Takeover Entertainment. That same year, the song "Underground" (from the Lost and Found mixtape) become Stryder's first solo hit, and he was featured prominently on the Ruff Sqwad album Guns & Roses, Vol. 2, released on Ruff Sqwad Recordings. Stryder then released his debut solo album, 2007's Star in the Hood, via the Takeover Entertainment label, along with two accompanying singles, "Breakaway" and "Something to Smile About." The nine-track EP Cloud 9 followed in 2008, and Stryder rose to the upper reaches of the U.K. charts with his inaugural 2009 single, "Take Me Back." The aptly titled chart-topper "Number 1" followed soon after, and then in August, "Never Leave You" debuted at the top spot. The album Catch 22 was released by Island Records that same month, debuting at the number two slot on the U.K. albums chart. A second Island set, Third Strike, was issued in 2010. ~ Jason Birchmeier, Rovi