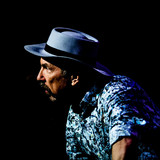 Rob Snarski is a singer, a velvet-voiced troubadour. His musical life began as a ten-year-old, playing a very heavy 120 button accordion gifted to him by his grandmother. He took up the guitar in his teens and formed Chad’s Tree in the 1980s with his singer, song-writer brother Mark. Chad’s Tree released two albums, Buckle in the Rail and Kerosene along with several singles before Rob left to pursue his interest in words and melodies. He found his voice and the spotlight with part-time, holiday-band The Bottomless Schooners of Old, featuring members of The Triffids, later going on to share vocal duties with David McComb in The Blackeyed Susans and singing the songs penned by McComb and founding member Phil Kakulas. Later, he took on the craft of song-writing himself. He has written and co-written songs on The Blackeyed Susans releases and has released several solo CDs and duo recordings – There Is Nothing Here That Belongs to You with Dan Luscombe, his acclaimed solo debut Wounded Bird and the album of cover versions, Low Fidelity (Songs by Request, Vol. 1), recorded at home in the hills of Tecoma on a trusty iPhone. 2019 saw the release of Sparrow & Swan his second solo release of original material and a gravitational pull towards the narrative. Rob has toured the globe with The Blackeyed Susans and as a guest vocalist with The Triffids and The Go-Betweens, and has graced the same stage as Johnny Cash, Leonard Cohen and Nico amongst others not quite as popular.