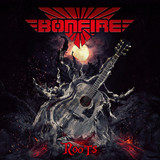 During the late 1980s, the much-loved German metal/hard rock ensemble Bonfire were one of the most acclaimed international melodic hard rock acts, with their 1986 debut, Don't Touch That Light, and 1987 follow-up Fire Works considered classics of the genre. The band ceased operations in the early 1990s, but they returned in the 2000s with renewed vigor and a seemingly endless appetite for performing, and have since gone on to release a string of well-regarded studio efforts like Strike Ten (2001), The Räuber (2008), and Fistful of Fire (2020). Formed in the city of Ingolstadt in 1980 under the name Cacumen, the group's personnel changed over time, with the only permanent member being founder Hans Ziller. The band, who have drawn comparisons to like-minded decibel-pushers like Scorpions, Accept, Whitesnake, and Saxon, released their breakthrough debut long-player, Don't Touch That Light, in 1986. Bonfire issued three more full-length albums -- Fire Works (1987), which spent 30 weeks on the German Albums chart, Point Blank (1989), and Knock Out (1991) -- before closing up shop for a short period of time in light of the peaking grunge and alt-rock scene. The band returned in 1996 with the aptly named Feels Like Comin' Home, followed closely by Rebel Soul (1998) and Fuel to the Flames (1999). The turn of the century saw Bonfire continuing their newfound prolificacy, issuing a string of LPs and concert albums, with highlights arriving via 2001's Strike Ten, 2003's Free, 2006's Double X (which celebrated their 20th anniversary), and their ambitious 2008 rock opera The Räuber. In 2015, the group released Glorious, their 15th LP, and in 2016 they celebrated their 30th anniversary with their first double album, Pearls, which featured newly recorded versions of some of their best-loved songs. The AFM Records-issued Byte the Bullet, an album of all-new originals, appeared in 2017, with Temple of Lies and Fistful of Fire arriving in 2018 and 2020, respectively. ~ James Christopher Monger, Rovi