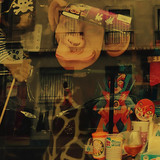 I Believe In My Mess

Featuring I Believe In My Mess

I Believe In My Mess consists of Geert de Groot on bass, guitar & synths, and Frank van Praag on guitar, rhythms, electronics, tapes, vocals. The musical world of this Amsterdam-based duo is rooted in classic RnB, indie & electronic music, and informed by dub, krautrock & psychedelic. Much of this world is instrumental, text and vocals play a lesser role. An experience in musical freedom at its best! The music of I Believe In My Mess is indebted to albums like My Life In The Bush Of Ghosts by Brian Eno/David Byrne and There's A Riot Goin' On by

Sly & The Family Stone, with its solid experimentation and adventurous craftsmanship. But there is also affinity with musical quests such as in Sandinista by The Clash and On The Way To The Peak Of Normal by Holger Czukay, or with mixtapes by Nicolas Jaar. And of course there cannot be enough tribute to dub great King Tubby! who added a new dimension to modern pop music by reusing existing tracks. I Believe In My Mess has released ten singles since 2016 with their own Filthy Good Records. Since 2019 releases were in collaboration with Excelsior Recordings. In addition, I Believe has mixed dub tracks for De Jeugd Van Tegenwoordig, Hallo Venray, Canshaker Pi, Fatima Yamaha, Scram C Baby and Meindert Talma, to name just a few. In 2020 they released their debut album Do Unto Others.