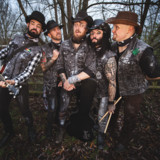 Founded in the Wild West of Worcester, Bootyard Bandits are a bootscootin' tongue-in-cheek country rock band hotly tipped to become one of the UK's "most wanted" bands in 2019. Comprised of ex-members of The Defiled, Grim Reaper, Fury and Villains and armed with an arsenal of anthems such as “Hoedown Showdown”, “Shirt Potatoes” and “Cowboys and Indian Takeaway”, these outlaws will be riding this rockin’ rodeo across Europe supporting pirate-rockers Alestorm in Feb/March 2019 before ambushing their way across the UK in support of Massive Wagons. Debut single "Hoedown Showdown" is accompanied by a hilariously gruesome LEGO-based stop-motion video which took over a year to make! The video premieres 15th Feb through Classic Rock Magazine and is poised to take the internet by storm.