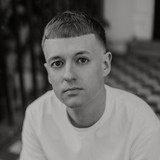 Cultivating an unmistakable brand of humble, acoustic music which bridges the gap between alternative hip-hop and indie pop, Brixton-based rapper and singer BUSHROD has found himself fast on the rise. Tackling profound subjects including family life, mental health, love and loss with his signature charm and effortlessly slick wordplay, the emergent wordsmith has drummed up a loyal following with his down-to-earth discography and vivid visuals, with two mixtapes – 2019’s Happy Go Lucky and 2020’s Twentyhood – as well as a string of critically acclaimed singles already under his belt. Born in the Oxfordshire market town of Banbury, the talented twenty-something landed his big break with an appearance on SB.TV’s legendary ‘Warm Up Sessions’ freestyle series, and has since ticked off a plethora of landmark achievements including supporting chart-topping superstar Professor Green on tour, receiving a glowing endorsement from Complex Magazine and going viral on Depop Drama with his uniquely hands-on approach to music marketing. With a wealth of new material en route which continues to perfectly encapsulate the psyche of young Britain, listeners would be wise to get acquainted.   Instagram: @bushrod bushrodmusic.co.uk