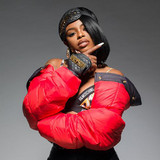 South Side MC Dreezy debuted in the early 2010s, and her appearances on underground remixes caught the ear of fellow Chicagoan Common. After years issuing mixtapes and EPs, she made her official full-length debut on Interscope with 2016's No Hard Feelings. Born Seandrea Sledge, she began rapping at 14, influenced by J. Cole and Lil Wayne. After a handful of appearances on tracks by Sasha Go Hard, Lil Durk, and Mikey Dollaz, she issued her first mixtape, Schizo, in 2014. That same year, she released a self-remixed version of Nicki Minaj's "Chiraq." With Dreezy's version hitting half a million views in no time, she was invited to join Common on the track "Hustle Harder" for his Nobody's Smiling LP. In 2015, she signed with Interscope and released a pair of EPs: Call It What You Want and From Now On. Her debut full-length, No Hard Feelings, arrived in 2016. The set included Dreezy's first charting single as a lead artist, "Body," featuring Jeremih; debuting at number 15 on Billboard's Top R&B/Hip-Hop Albums chart and landing at number 101 on the Billboard 200, it was ultimately certified platinum. She followed it with a string of singles, including 2017's "Spar" with 6lack and Kodak Black and 2018's "2nd to None" with 2 Chainz. Additional singles arrived in 2018, such as "Where Them $ @" and "Chanel Slides" with Kash Doll. Those tracks landed on her sophomore effort, Big Dreez, which was released in January 2019. ~ David Jeffries & Neil Z. Yeung, Rovi