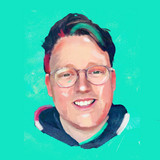 “JC Stewart, Lewis Capaldi and Dermot Kennedy are all leading the way in 2020 pop music and now…Daniel Duke is definitely going to be following in those footsteps.” Hailing from Banbridge, Northern Ireland, Daniel Duke honed his craft busking on the streets of Belfast. But his appearance on The Voice UK in 2015, in front of 8 million viewers, launched him onto the international stage. An instant hit with the show's judges and the audience at home, Daniel managed to turn a fleeting shot at stardom into a full-time career, building a strong fanbase around the world. In 2020 BBC Introducing’s Taylor Johnson described Daniel as, “proof that you can go on those talent shows, retain your credibility completely, and it can be a platform for you to build and grow.“ Daniel released his debut album, Brother, in 2016 and quickly received acclaim from fans and fellow artists alike. The record was described as “Hoarse, soulful and soaring” and compared to “Ray LaMontagne at his earthy and world-weary finest” and “David Gray at his most bittersweet and emotive.” Tracks from Brother have appeared in hit shows like Kevin Probably Saves the world (abc) and The Young & The Restless (CBS). Daniel's latest album, Good Love, came out in April 2020, building on his unique brand of songcraft—fusing catchy, singalong pop hooks with the heart and soul of Irish folk music. The first single, Only Young, was added to Spotify's "New Pop UK" playlist and the record received BBC radio airplay.