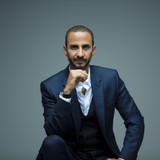 Over the past two decades, Mamdouh Saif has been a formidable force in the world of Arabic music, creating timeless musical masterpieces. A Berklee College of Music alumnus, Mamdouh has collaborated with some of the world’s most established artists and producers in the Arab music scene, most notably Abdulmajeed Abdulla and Mohammed Abdu, and has performed as a keyboardist at hundreds of concerts in front of thousands of concert-goers. Some of Mamdouh’s finest and most known work includes the albums Ya Taib Algalb (1996) and Harmony (2014). The former album gave Mamdouh his first big break into the music industry and was followed by appearances on TV and Arabic radio stations. Mamdouh also became a sought-after person to work with, whether it be for his skills as a composer/arranger or his multi-instrumentalist talent. Coming off the back of two significant 2017 concerts -- the first at the A.H.A.R Salmiya Theater in Kuwait and the second at the Aljawhara Stadium (King Abdullah Sports City) in Saudi Arabia -- Mamdouh is set to release has long-awaited third album In Between Two Seconds on November 10, 2017 under his label Music Sound US in the United States. A graceful departure from Mamdouh’s previous sound, In Between Two Seconds is a musical case study in genre blending and sonic storytelling.