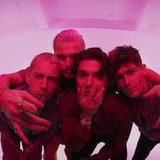 The Vamps, aka Brad Simpson, Connor Ball, Tristan Evans and James McVey, had never really had the chance to be bored before 2020 struck. Since their platinum-selling debut album, Meet The Vamps, crashed into the UK charts at number 2 in 2014, the band have been holding onto a dream-like rush of albums (four in total, including 2017's chart-topping Night & Day (Night Edition), featuring the Matoma-assisted global smash All Night), singles (eight top 40 hits including five top 10s), and world tours (they're the first band to headline London's O2 Arena five years in a row). With the tour for 2018's guest-heavy, Top 3 hit Night & Day (Day Edition) all done the band returned from a short break when a global pandemic struck just as they were crafting new album, Cherry Blossom, that title a reflection of the theme of rebirth that runs throughout.