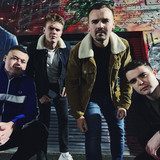 Since emerging from Birmingham in 2017, Rookie have infused the sound of modern indie rock with 80s-style alternative and pop music, creating a combination of cutting vocals, hard-hitting riffs & foot-stomping stage shows. The band, influenced by: Nothing But Thieves, The Kooks, Sea Girls & Green Day, have established a loyal fan base and secured their place within the UK indie rock scene. Current guitarist, Tom Owen, met Joe Webster (Vocals) at a Rookie gig in 2018, after going to watch his mate Mitch Elliott (Bass) play drums in the support act. Owen had one too many, got chatting to Webster after the gig & they hit it off. On a whim, Webster asked Owen if he wanted to audition for the band. In late 2018, Owen joined the band with Jimmy Hearn (Drums). Elliott secured a festival slot for his band at Cannon Hill Park, however after leaving, recommended Rookie take the slot. Short a bassist, the band only agreed to play the festival if Elliott join. Succeeding this show-stopper, they played at Tatton Park alongside Scouting For Girls & stellar headline shows in Birmingham and London. 2020 started strong for Rookie, recording for the first time as the current line-up, accompanied by an exhilarating Midlands tour. However, with the Coronavirus outbreak making it impossible to play live shows, they decided to focus on song writing. The band stayed active throughout 2020, performing “lockdown” covers online & playing in “Finsperry 2020,” a virtual festival supporting the NHS.