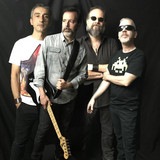 Artica project began in 1989 in a high school in the outskirts of Rome. On February 1993, the band released the first demo-tape Marea featuring 8 tracks. The same year Artica appeared for the first time on a CD support for Alea Jacta Est sampler 'l'Appel De La Muse, vol. IV'. The interest in the band increased in Italy and abroad after the release of the second demo-tape, “Dahlia” (February 1994) while the name of the band was featured also on the volumes `Gothic-Rock II - From the eighties into the nineties' (Jungle Records) and `Death by Dawn 2 - The Avenger' (Apollyon Records), . On top of this in 1994, Mick Mercer included Artica in the third 'Gothic-Rock book'. In 1995 the band signed a contract with the german label Nyctalopia for the first album CD `Ombra e Luce', featuring 12 tracks. In April 1996 started a new recording session for the forthcoming CD `Natura', produced on July 1997 by the Italian label Radio Luxor. After a long period of silence in April 2006 the band released the acclaimed album ‘Plastic Terror’ with the roman label Decadance Records. After a critical period of split-ups and reunions Artica has been refounded in 2014 and in July 2016 released the album The Tapes, a collection of b-sides and demo tapes and B-sides under their label EIN music. In June 2017 the long awaited CD "Panacea" has been finally released. A new chapter of Artica's music that critics have defined a masterpiece in new wave and gothic rock music.