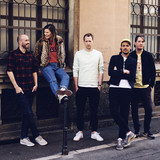 Formed in 1999 under the name Sunnyglade, the German alt-rock band Juli initially sang in English. However, after the departure of original vocalist Miriam Adameit and drummer Martin Möller in 2001, the band added vocalist Eva Briegel and decided to start writing songs in German -- for no other reason than they could simply write better lyrics in their native language. It was also after Briegel joined that the band -- further including Simon Triebel, Marcel Römer, Andreas "Dedi" Herde, and Jonas Pfetzing -- changed its name to Juli and began work on its debut album. Although the group's first single, "Perfekte Welle" (meaning "Perfect Wave"), was a moderate success after its release in June of 2004, the song was banned from radio and television play in the wake of the tragic Indian Ocean earthquake and tsunami that December. Despite this setback, Juli's debut album, Es Ist Juli, received positive critical and fan reception and went on to sell over 500,000 copies. The band's success, along with the popularity of releases by other German bands singing in German, inspired some critics to say the band was part of a new music movement they named "Deutsch Rock." The band's sophomore effort, Ein Neuer Tag, followed in 2006 and in 2007 a live version of the record appeared. After a one-year break, Juli returned to the studio to record In Love, their third album, which was released in 2010 and featured the singles "Elektrisches Gefühl" and "Immer wenn es dunkel wird". ~ Matt Collar, Rovi