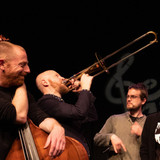 "Refreshingly Radical Jazz with a Large Portion of Punk Attitude" With their debut album Going Down The Well, MoonMot points to where jazz is heading in the 21st century. The sextet, with members from Switzerland and the United Kingdom, combines essential musical ideas of the past hundred years with a deep understanding of the jazz tradition. Despite adding twelve tone rows, electronics or odd meters to their music, the band succeeds in maintaining a coherent group sound.   MoonMot’s compositions (contributed by all band members) provide the perfect vehicle for the sextet's true passion: Group interplay. The source material of the compositions is creatively used to take the music in exciting directions. With group interaction at its core, the band celebrates what has always been the essence of jazz: A big heart for spontaneity, the mutual influence on each others playing, a refreshingly radical attitude with constant risk, always on the edge in search of a collective venture.   The band emerged from the activities of the LUME Collective in London run by the band's two saxophonists Dee Byrne and Cath Roberts. Together with bassist Seth Bennett and drummer Johnny Hunter, they were invited to Jazzwerkstatt Bern in 2017, where they played for the first time with Bern musicians Oli Kuster (Keys) and Simon Petermann (trombone, electronics). After a successful concert the band were invited to perform at the renowned EFG London Jazz Festival and the contest BeJazz Transnational Bern.