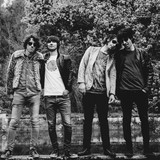 www.stay.cat https://staybcn.bandcamp.com/ Stay is a psych rock band from Barcelona since 2005. They have a five LP career in Spain and some sold outs EPs in the UK, where they played several times (This Feeling London, Liverpool, etc..). They have been playing as well in German, Italy, France and obviously in Spain in gigs and fests like Primavera Sound, Sonorama, Low Cost, etc. Last works like The Fourth Dimension (2012)or The Mean Solar Times (2016), produced by Owen Morris (Oasis, The Verve), demonstrate the band’s flair for tightly composed songs that include brief but awesome instrumental segments, excellent guitar-organ interplay, plus great melodies. They were broadcasted on BBC6 (Gideon Coe) and supported Beady Eye, Ocean Colour Scene, The Pretty Things and Daniel Wylie (Cosmic Rough Riders). Chosen by Liam Gallagher twice to support his Beady Eye gigs in Madrid and Barcelona and after working with Andy Bell (Ride) and Owen Morris in 2016, Barcelona psych rockers Stay are back again with the new striking Britpop single "Hold On". It was recorded during pandemic sessions to encourage listeners to keep on with their lives and illusions without stop being themselves in an optimistic and direct message. A powerful pop song with an energetic melody and catchy chorus. Stay are a mix of fresh soft psychedelic sounds, early Charlatans or Fools Gold-era Stone Roses sound-like as coetaneous bands like Temples, Woods or Tame Impala.