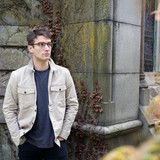 San Fermin is the brainchild of Brooklyn's Ellis Ludwig-Leone, an artist with a broad musical background who pursued musical studies at Yale and sharpened his teeth working with avant-garde classical composer Nico Muhly (Björk, Grizzly Bear, Antony & the Johnsons). Emerging in 2013 with their stylistically diverse eponymous debut, the collective's sound has evolved over the years with electronic pop and experimental rock adding new colors to their distinctive modern chamber pop. Filled with blustery, unpredictable, avant-garde arrangements and rooted in the preciousness of indie pop, Ludwig-Leone's debut self-titled record found him joined on vocals by longtime friend Allen Tate as well as Jess Wolfe and Holly Laessig of the Brooklyn group Lucius. The versatile San Fermin saw release in September of 2013. The band toured in support of the debut for much of the next two years, returning in 2015 with their more experimental sophomore album Jackrabbit. While Tate stayed on as the main male vocalist for Jackrabbit, the ensemble vocals of Lucius were replaced by full-time live singer Charlene Kaye. In January 2017 San Fermin issued "Open," the first of two singles -- "Bride" followed a week later -- heralding the arrival of their third studio long-player, the more pop-forward Belong, which dropped in April. Kaye left the group in 2019 to pursue a solo career, but appeared on that year's concert album Live at the Fillmore and in the accompanying documentary No Promises. 2019 also saw the release of The Cormorant, part one of a planned two-part studio LP centered on themes of childhood and the loss of innocence. ~ Jason Lymangrover, Rovi