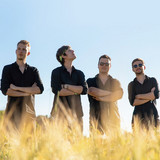 Basement 24 is a Rock 'n' Roll Band from Munich which was founded in 2013 by Felix (Vox, Git), Markus S. (Git), Simon (Drums) and Markus K. (Bass). When you meet Basement 24 you will recognize them by the neon green suspenders whether upon their debut album cover or live on stage. Their music style can hardly be described in one word for it varies a lot between old 50s rock 'n' roll mixed with modern rock sounds. Catchy melodies and lyrics will soon get stuck in your head - even your grandparents couldn't help dancing! The four boys hit stages all across Bavaria and even made it into the final four out of 24 bands at the Mammuth Contest in 2016. In early 2018 they finally released their debut album "Wrong Decade", followed by

another single "Blue Sunshine" and their latest release "I'm Okay" in 2020. By now Basement 24 can be seen live regularly at festivals or club shows and they keep on producing more music.