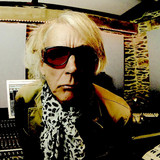 tracks appear on your Release Radar! Or sign up at www.songman.org “If you like intriguing and experimental songwriting, charismatic performing and singing that works in some of the areas explored by the likes of Scott Walker, John Martyn, Léo Ferré, & Jacques Brel, you'll be inspired to discover Simon Scardanelli's work.” In 1980 I recorded a bizarre and rather odd album for X Records in Germany. It featured, amongst it’s eclectic stylings, a couple of pioneering electro-pop tracks - in fact I'd had hired from Kraftwerk an early analogue sequencer that no-one in the studio understood, and it was sent back unused. The album was mostly ignored, but I've continued to create music throughout the ensuing years, having minor success with my rock-pop duo Big Bam Boo on MCA in the late 80s, and continuing to release on my own label Resonator Records. I have 8 solo albums as well as numerous EPs and singles released.   My latest album is "The Rock, the Sea, the Rising Tide" (2019). I'm currently working on my next - a folk-opera, along with two musicals, one of which, "CLEAN - the Musical" premiered at Brighton Fringe in June '21, receiving 5 star reviews.