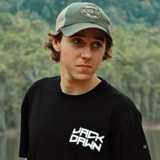 Passion and Energy, this is what you can expect from Jack Dawn. Wither it be on stage or in the studio Jack Dawn strives to connect with his audience through his passion for his craft. After falling in love with music at a young age, Jack has always aspired to dominate the music industry. With big dreams and a true passion for the scene, Jack has already made an impression on the local scene landing shows at some of Brisbane’s most iconic venues. As an aspiring artist Jack hopes to land releases on major labels with a signing by Australian dance label Crookwell Records already under his belt. Jack believes he can create a unique connection through both his music and live shows, he hopes to share his unique energy and passion by signing with a touring agency in the near future. Jack strives to bring a unique sense of energy back to the Australian Dance music scene with his recognisable adrenaline-filled, fast paced musical style that wouldn’t be out of place at any festival main stage. Jack works to combine this energy-filled style with expressive, relatable song writing making his productions easily relatable to a broad audience whether it played on a main stage or on the radio. Over the past six years Jack has continually developed his song-writing and production skills qualifying as one of the most enthusiastic emerging artists in the Australian EDM (Electronic Dance Music) scene.