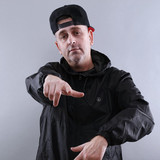 Spair is a DJ/Producer based in Las Vegas. His origins started in the Bay Area where at a young age he built up his rep winning local and national DJ competitions. This attention awarded him a record deal. Releasing his first Vinyl EP in 2001 then transplanting to Las Vegas in the late 2000s he would go on to hold residencies at some of the biggest clubs on the strip. Aside from party rocking. He’s played the role of talent buyer throwing events with entertainment groups including SBE nightlife and MGM Grand. As a music producer, he’s produced music for TV shows such as Access Hollywood and various cable networks.