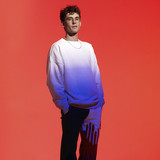 Felix De Laet, better known as Lost Frequencies, has soared to phenomenal success in recent times. Releasing his global smash hit ‘Are You With Me’ back in 2014 and quickly cementing himself as a name to watch, the track rapidly ascended by hitting multi-platinum status and taking the #1 spot in 18 countries. Add to this Lost Frequencies was the first Belgian artist to secure his first 5 hit singles charting at the #1 spot on the Ultratop official Belgian charts, as well as the first Belgian artist to hit #1 in the UK, he went on to release his long-awaited debut album ‘Less Is More’ in 2016. The album, with notable singles’ ‘Beautiful Life’ and ‘What Is Love 2016’ dazzled globally, certifying a future star for a new generation. Lost Frequencies also firmly established himself as one of the strongest, fastest rising talents with his debut entry in the 2017 Top 100 DJ Poll at #26; ‘highest new entry’ that year. As the accolades multiply for Lost Frequencies, counting wins for ‘Dance International’ and ‘Hit of The Year’ at the ECHO award ceremony (comparable with the U.S. Grammy's) amongst his awards, he has also become a leading light in the world of streamed music. To date his music has received over 1 billion plays and counting as every release, from his remix of Major Lazer, Justin Bieber &amp; MØ’s ‘Cold Water’ to his most recent release ‘Crazy’ with Zonderling (already a #1 airplay hit in Belgium, Germany &amp; Poland), continues to receive support from fans across the world.