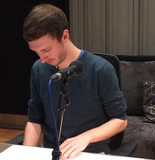 Raphael Fimm is an award-winning German film composer based in Vienna, Austria. Over the past years, he has scored many films including the Austrian short Le Constructeur de Malheur (2015) for which he received a nomination at the Hollywood Music in Media Awards and the multi-award-winning Canadian documentary The Sunrise Storyteller (2017) which premiered at the UN in New York. In 2018, Raphael composed the music for the South African movie Zulu Wedding which hit theaters in October 2019. In January 2021, his soundtrack for the German cycling documentary Tour du Togo (2020) has won the award in the category Best Score at the Hollywood Art and Movie Awards. His numerous works won awards for Best Original Score at the Sunlight International Film Festival, the Global Music Awards and the Los Angeles CineFest. For him, film music must not only support the movie, but has to have an own character and be able to tell the story of the film in its own language. Using the variety of an orchestra, Raphael is anxious to give every film a unique and personal musical language that forms the perfect symbiosis of picture and music.