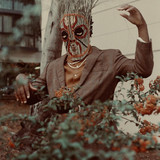 Siwo is the alter-ego of Simonal Bie, producer, vocalist, beat-maker and dancer of Mozambican origin based in Barcelona. Ever since he set foot in the city, Simonal has been considered one of the pioneers in promoting the Afrobeat scene, having founded legendary Afro-Funk band Moya Kalongo more than 10 years ago. In 2016 he created Nu Epoque, a Nu-Soul/ electronic band heavily influenced by J Dilla and Fela Kuti. Siwo is the culmination of all these projects in a personal venture, in which he explores his identity as a multi-discliplinary artist from the African Diaspora. After launching his solo EP Stand For, Siwo describes his sound as ''Electro-Afrofuturism with touches of hip-hop, punk, soul and afrobeat''. His explosive live performances accentuate his versatility as a musician, producer and performer.