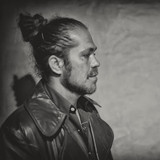 Citizen Cope aka Clarence Greenwood is a grassroots songwriter/producer who has released six studio LP’s and sold over 1M records in the US, despite never being embraced by most mainstream media. Raised in Washington DC, his music career took flight after moving to Brooklyn, NY. In 15 years of touring, he has built a devout following and his music has become the soundtrack to the lives of those who have embraced it. His first album in seven years, Heroin and Helicopters (March 2019), tackles personal and cultural themes based around societal struggles, political manipulation, relationships, self awareness, and spiritual enlightenment. It’s named after an encounter with rock ‘n’ roll icon Santana: one evening at the Fillmore in San Francisco, Santana told him to “stay away from the two H’s” - heroin and helicopters - both things having very fatal results with people in music. Cope saw meaning in the comment, reflected in the current epidemic of addictions that plague our world, not just to substances but to conflict, handheld devices, social media, and the lure of not having to work hard to get places fast. He observed a thread being woven, where mass production has trumped quality goods and shortcuts in life have become commonplace, enticing people to step over others for self-enrichment. It’s less a condemnation of others and more an acknowledgement of the part played by himself and the system that we are all forced to participate in- and the hope that we can do better.