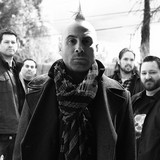 Selected by KCRW’s Anne Litt as one of LA’s best new indie bands of 2017,

since then the band kept busy writing, recording and headlining bigger stages. They are now releasing new music in 2020 starting with a single called, "Easy Coyote", on February 1st. Goodnight Kiss got their start In August 2015 when Brian Narvy (guitar, vocals) received a call from acclaimed frontman Wes Pagano (lead vocals, guitar). Shortly after they added well-known Ventura percussionist Rene Ponce into the mix. After a year of writing and performing as a three-piece, Wes contacted Brian "Boomer" Carroll to play bass who happened to already have a drummer in mind named Eric Goldstein. Now a 5-piece, the band has found success in the Ventura and LA music scene. Weaving together a unique sound shaped by rock, punk, soul, latin and folk. The guys of Goodnight Kiss consider The Beatles, The Flaming Lips, The Police, James Brown, and Radiohead as influences. In 2017, Goodnight Kiss released a 4-song EP, produced by Decorations’ Devon Geyer, which showcases the band’s dirty grooves, sweet harmonies, and thematic fixation on love, loss, while not taking anything too seriously. Expanding on that theme, the band continued to release singles in 2018 as they shaped and crafted their evolving sound.