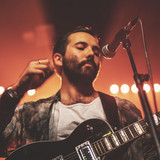 After creating his 'Silhouettes' EP with Ed Tullett ( Novo Amor, Hailaker), and the last year of critically acclaimed releases including ...if you're awake in the night, JJ went back into the studio to complete his debut album - “Present Tense”. Often compared to the likes of Sufjan Stevens, Bon Iver

and Big Thief, JJ’s new material - recorded at RYP Studios in London - is a bold and ambitious statement of intent. Weaving his assured and unflinching songwriting through genre-bending arrangements, it seems sure to confirm him as one of the UK’s most exciting talents. Complete with incredible string arrangements by Samuel Rowe, it’s an epic listen that sweeps between light and dark, moody and irreverent, all the while pivoting around JJ’s versatile and intimate delivery. With his band, JJ is set to return to a London Headline at Camden Assembly in October 2021