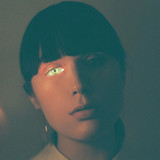 Louise Burns is a Canadian singer/songwriter from British Columbia who started her career as part of the teenage pop-punk band Lillix, then later forged an interesting and versatile solo career in the 2010s that ranged from jangling indie pop to new wave, jazz, country, and vivid synth pop. Following her Polaris-nominated Young Mopes LP, she closed out the decade with her fourth solo album, 2019's Portraits. After getting her start as an 11-year-old bassist/vocalist in the all-female teen pop-punk combo Lillix, Burns moved on when the band splintered in the mid-2000s. She began working as a solo artist and also joined the alt-rock trio the Blue Violets. Her first solo record, Mellow Drama, was released in 2011 by Vancouver-based Light Organ Records. On it Burns explored various styles, ranging from smoky jazz ballads and country laments to jangly girl group-inspired pop. Her next album, 2013's Midnight Mass, was co-produced by the Raveonettes' Sune Rose Wagner and featured songs driven by Burns' love of '80s synth pop. In 2017, she returned with her third full-length, Young Mopes, which featured backing from Ladyhawk's Darcy Hancock and Ryan Peters. A critical success, it was long-listed for Canada's prestigious Polaris Award. 2019's Portraits was a tightly focused pop effort which explored themes of looking back and embracing the past. ~ Tim Sendra, Rovi