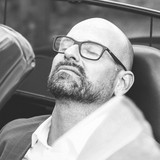 Gottfried Schuster (born 25 September 1975 in Feldbach, Styria, Austria) is an Austrian musician, composer and producer.   His musical style is based on a combination of orchestral music, house, electro, new age and pop. Gottfried Schuster first appeared as a bassist and producer of several bands such as Elektronaut during the mid-late 1990s. In the early 2000s he became involved in producing and publishing with the Austrian Rock-Pop-Band Shiver who has been supporting act for Söhne Mannheims, Liquido, Alanis Morissette and Silbermond.   In the following years Gottfried Schuster has become the producer for several artists and bands and works as a composer and producer for station designs for several European TV-stations, music for commercials and film soundtracks.   Composing since he was 10 years young but acting most of his life in the background in 2017 he officially released his first album KRAFT and HYGGE.   „Music is my work, my hobby, my mental health coach and my life!“ is one of the most cited sentences of Gottfried Schuster.   He is engaged to Tamara von vollkommunikativ, Counselor, Mental Health Coach and Business Coach. Together they work on music and concepts for mental health & wellbeing.   Releases 2020 SOLILOQUIES 2020 ISOLUTION 2017 KRAFT and HYGGE 2017-2021 Signations & Jingles Vol 01 - Vol 07