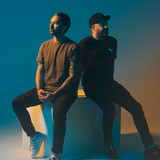 Since forming in 2012, Leftwing : Kody (AKA Jon and Chris) have made it look so easy. Just a year after they formed, the duo was named by Mixmag and DJ Mag as ones to watch and have maintained a foothold in the underground with their production and crossing of genres. Having made an impact with releases on Desolat, Relief, Moon Harbour, Sola, Toolroom, Solid Grooves, Truesoul, Sony, Circus Recordings and Lost, Leftwing : Kody’s tracks have seen them reach dizzying new heights over the past years. What’s more, their single Snap Back became Desolat’s best-selling track and their remix of Kelis’ Milkshake on Sony was a top 10 hit, whilst Keep Pushin’ On saw success via their Lost imprint. With the most pivotal track of their career, I Feel It racking up over 10 million streams as well as Paul Woolford and Boston Bun remixes, 2019 welcomed a signing from Columbia Records. Boasting props Radio 1 DJs as well as some of the biggest names tech-house including Carl Cox, Jamie Jones, Loco Dice, Adam Beyer, Steve Lawler, Nic Fanciulli, Yousef, Green Velvet and Hot Since 82, it’s no surprise that they are poised to deliver their biggest year yet.