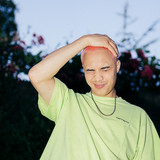 While the world stood still during the past year’s lockdowns, The Cool Quest worked on this viby, catchy bop, that instantly makes you want to find a bloc party to let go at! With the recognizable soulful vocal, genre-bending sound, and influences from hiphop to indie- and alternative pop, the band, once again, shows they are well capable of renewing themselves.  The Cool Quest already build an extensive portfolio in this industry. With their albums ‘Funkin’ Badass’ and ‘VIVID’ they won several awards and their song ‘Goodlife’ got added to the soundtrack of EA’s NHL game. With their performances on festivals like Reeperbahn Festival, MS Dockville (Germany), Tallinn Music Week (Estonia) and ESNS (Netherlands) they are on their way of conquering the world with their music.