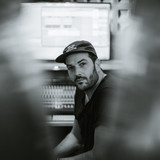 Joton is synonymous with techno, iron, futuristic and sensitive, all mixed with the precision and speed of a surgeon. His powerful personality and marked charisma, as DJ and producer, is based on a stylistic maturity, a professional serenity and a well-founded artistic criterion, always in constant and restless progression, through which everything that he pricks and produces is identified. His sound is industrial, analog and mechanical. Dystopia and the club are discussed. Detroit, Berlin and Birmingham. Starting from the very marrow of techno. It is physical, blunt, modular and exciting. His label `Newrhythmic´ has been more than 15 years supporting high-octane techno by native and foreign artists. Joton’s tracks have been published by labels such as Fabric, Modularz, Quartz, Odd Even, Symbolism, Planet Rhythm, Raw Raw, Format, Dynamic Reflection, More Than Less ... and have been charted and screened by artists of the great size of Ben Klock, Dvs1, Rodhad , Dave Clarke, Ben Sims, Oscar Mulero, Surgeon, Truncate .... Joton's global touring schedule has filled up with performances at the most renowned venues in the world including Under club in Buenos Aires, Tresor in Berlin, Rex club and Le Batofar in Paris, Corsica Studios in London, Grelle Forelle in Vienna, Propaganda in Moscow, Domunne in Tokyo, Vurt in Seoul, Liquid Club Malta, Razzmatazz and Moog in Barcelona, Stardust and Fabrik in Madrid, among others.