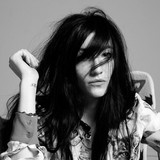 Known for their bold, raucous sound and defiant punk attitude, Queen Kwong is an alternative rock outfit from Los Angeles, California. Alongside the discordant, noisy sound they create in the studio, the group developed a reputation for their live shows on both sides of the Atlantic for their wild performances, which earned them comparisons to Nirvana, Swans, and Queens of the Stone Age. Frontwoman Carré Callaway's stage presence was compared to Patti Smith's and Iggy Pop's. The project was founded by Callaway in 2009 and delivered feral rock & roll on albums such as 2015's Get a Witness and 2018's Love Me to Death. Callaway has been writing and recording material under her own name since the early 2000s and was discovered in New Orleans at age 17 by Trent Reznor of Nine Inch Nails, leading to her opening for the band on their 2005 With Teeth tour as a solo act. She relocated to Los Angeles where her songs took on myriad different tones and emotion under Reznor's guidance. After taking a break from the industry for several years, she returned in 2009 under the moniker of Queen Kwong with a full band, opening for Nine Inch Nails again on their 2009 Wave Goodbye tour. The following year, Queen Kwong self-release their debut, Love Is a Bruise. The EP featured the track "Pet," which was used for Levi's 2010 fall advertisements. Queen Kwong spent the next few years writing, recording, and touring internationally. In 2012 they put out their first single, "Long Gone," written with ex-Icarus Line singer Joe Cardamone. They released their second EP, Bad Lieutenant, via Instant Records in 2013. 2014 saw the release of the single "The Strange Fruit," which featured Black Light Burns mastermind and Limp Bizkit guitarist Wes Borland. Callaway spent the next two years writing the band's first full-length, Get a Witness, which was released on Dissention Records in 2015. The band promoted the record with a nationwide and European tour, widening their fan base. By this point, Borland had joined the group full-time and started dating Callaway; the two moved to Detroit in 2015 and were married in 2016. They spent 2017 writing the band's sophomore album, Love Me to Death, which saw release in 2018. Queen Kwong toured in support of the record with shows throughout the U.S. and Europe. ~ Rob Wacey, Rovi